“Those that fail to learn from history are doomed to repeat it.”
- Winston Churchill

If you're going to make it in any industry, you better know its history...otherwise you could be making the same mistakes as your predecessors.

For example, did you know that technical analysis goes all the way back to Babylonian times? As far back as 384 BC, there were technical traders speculating on the markets. They would trade barley, dates, wool, mustard, and more. Astrologists would write down price data on clay tablets, so here's a shout out to those mystics from southern Iraq.

(I was mildly ticked off that Larry Hite had a longer back test than me, so take that Larry! wink wink nudge nudge)

Thankfully someone else converted the data to "price in silver shekels" instead of "liters per shekel." Imagine if Apple was priced in shares per dollar? Yikes. Anyhoo, here's a chart of barley prices during that time. Notice the crazy spikes and reversion to the mean (the way to trade back then would be a simple reversal system...serial correlation was very very high). 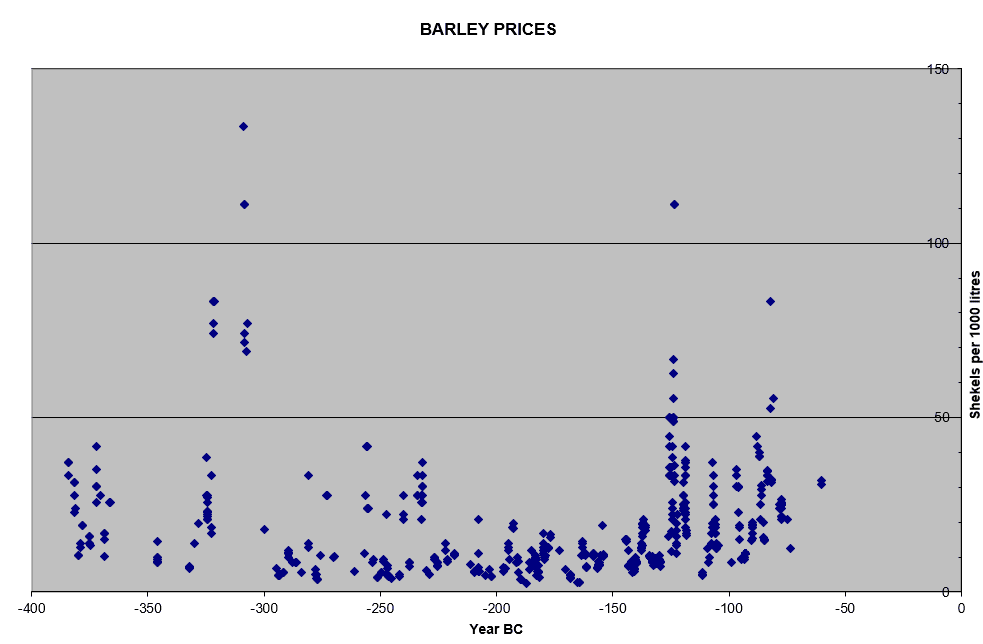 There's a reason I'm pointing a finger at technical trading being an ancient concept...because so many think of it as some kind of new discovery or that no one else has thought about drawing lines on charts and getting rich in the process.

Why isn't there some family dynasty that makes their fortune from trading this way? After all, this form of "analysis" has a 2300 year head-start on computerized trading.

In 1936, Gann famously said that the Dow would never sell above 386 again.

I think the Elliott Wave guys said the same thing after the 1987 crash.

People like Gerald Tsai used TA in the 1960's, and became a prominent figure at Fidelity Investments...then he blew up spectacularly in the 1969-1970 bear market.

Jesse Livermore did the same thing, eventually committing suicide. (why he is so celebrated, I don't know). Look, there are plenty of edges in the markets, but you have to be doing things that are out of the ordinary to make serious money...and more importantly, they have to be proven statistically.

For example, in the last post, I showed that seasonality in the stock market does not exist...yet it's often quoted as being true. So what works, Dan?

Here's a bunch of strategies that work and have stood the test of time.

Corona Del Mar, CAHowdy Friend! “It’s already down. Shouldn’t I wait to sell”? “No,” I said. “It could just keep falling.” “It’s Murphy’s Law that small losses will…