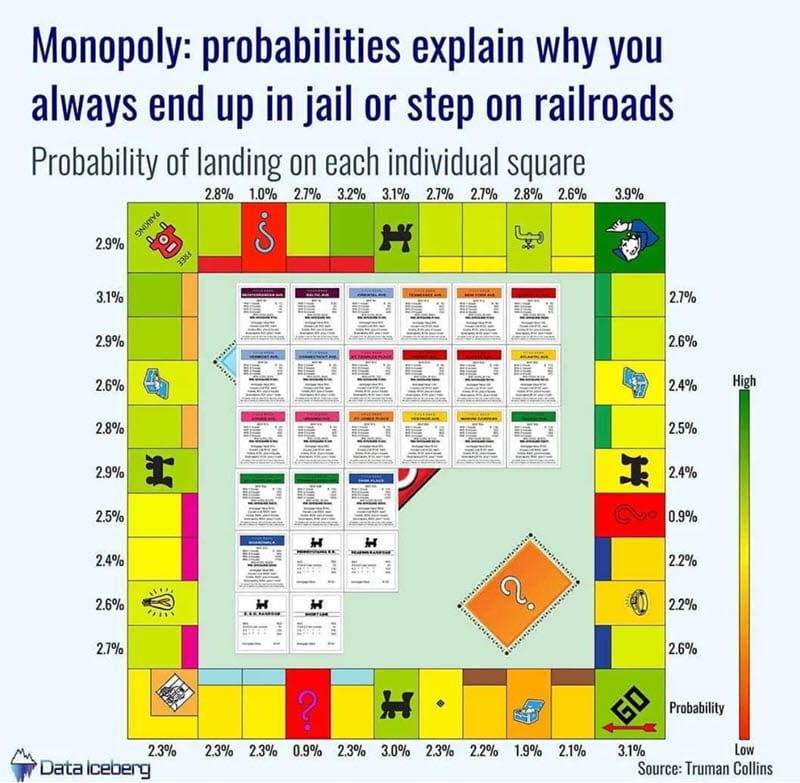 Here's how to beat the board game, Monopoly...

And if I can teach an eight year old how to ace Monopoly in four lessons (which I did), then you can take these lessons and apply it to beating the markets.

If you think the creator of Monopoly didn't completely understand statistics, you would be sadly mistaken.

All you have to do is look at the image above and see that the three chance cards (the question marks) have the worst odds of landing on them.

You'll also see that some properties just aren't worth buying because they aren't landed on much.

At first, little Zane (the 8-year-old) was acting out every time something bad happened...

It wasn't fun playing with him because he was being a poor sport.

Who wants to play with someone acting out?

// By the way...is this sounding similar to trading? Read on, it gets better //

He's only 8...so I took him aside and taught him a reallllllyy simple way to beat Monopoly.

Lesson 1: First I taught him basic probabilities...that the dice are random and can't be controlled.

It's not his fault if he lands somewhere...it's part of the game.

Lesson 2: And also that the two dice most commonly add up to seven.

That means you won't land on certain properties that much.

He nodded eagerly when I showed him all the ways to make a seven.

Lesson 3: Then I showed him how you can't make any money with owning just the property...you don't make money until you put houses on them.

He smiled...it was starting to sink in.

Lesson 4: Then I showed him how half the board had expensive properties...and how he should skip those and focus on sides 1 and 2 (orange, light blue, purple).

I created a monster!

Because right after that lesson, he won his first game!

And then the next.

He went from a moody, complaining little turd to grinning ear to ear like the Cheshire Cat.

Now how can we apply that to your trading my friend?

Rolling the dice is random. And as I said in lesson 2, it's a game of probability.

With two dice, you're probably going to get a seven. As the numbers get bigger or smaller, the odds go down.

Little Zane learned to expect something near a seven when the dice get rolled.

And whatever he lands on is just part of the game -- good or bad.

In trading, we use computers to know approximately what our odds will be for a winning trade (you are using a computer to test right?)

A 66% win rate is common in computerized stock trading.

That means one outta every three trades will be a loser.

It's part of playing the game.

But if you don't look at it that way, and you let your ego take over, you can start throwing things around in a rage...or kick the dog, or yell at the wife...

And now you're sleeping in the dog house while your wife cuddles with poor bruised Sparky.

In Lesson 3, little Zaney learned that in order to make $$$$ you have to own all properties of the same color. That way you can build houses on them.

That's why it's so important to trade a basket of stocks.

Spread your money between several trades.

A more advanced technique is to spread your money between several trading strategies, which is why Jim Simons, Paul Tudor Jones, and yours truly have added Bit-coin strategies to the mix.

Speaking of Bit-coin, we come back to Lesson 4: Focus on sides 1 and 2 of the board because the odds are better for getting properties with high returns.

I recently used our A.I strategy builder to come up with a Bit-coin strategy that trades much more often than previous ones.

My buddy is trading it, and he was complaining that it hadn't made a trade in over a month.

Naturally, Bit-coin suddenly dropped 50%, and he and I avoided the decline.

The lesson learned is to trade when the odds favor you. Don't buy just to buy.

If you want some action, go to Vegas. The billionaire casino owners are nice enough to get you drunk for "free" as you lose your shirt and help pay for their shiny new yacht.

At the end of the day, if you follow these simple lessons, you are well on your way to crushing it in the markets.

I hope this helps!

Discover 3 brand new trading strategies invented by A.I. so advanced that humans could never have invented them in a million years.

You’re about to find out about…

Editor’s note: Copy & paste this single line of code for up to 90.1% winners. This shockingly simple strategy is completely contrary to what the “gurus”…

Corona Del Mar, CA Howdy Friend! I was big time into baseball when I was in high school. The game called to me because not only is it…

Corona Del Mar, CA  Howdy Friend,   If you’re near retirement age, the Akrasia Effect has likely cost you millions.   We ALL suffer from it in one way or…